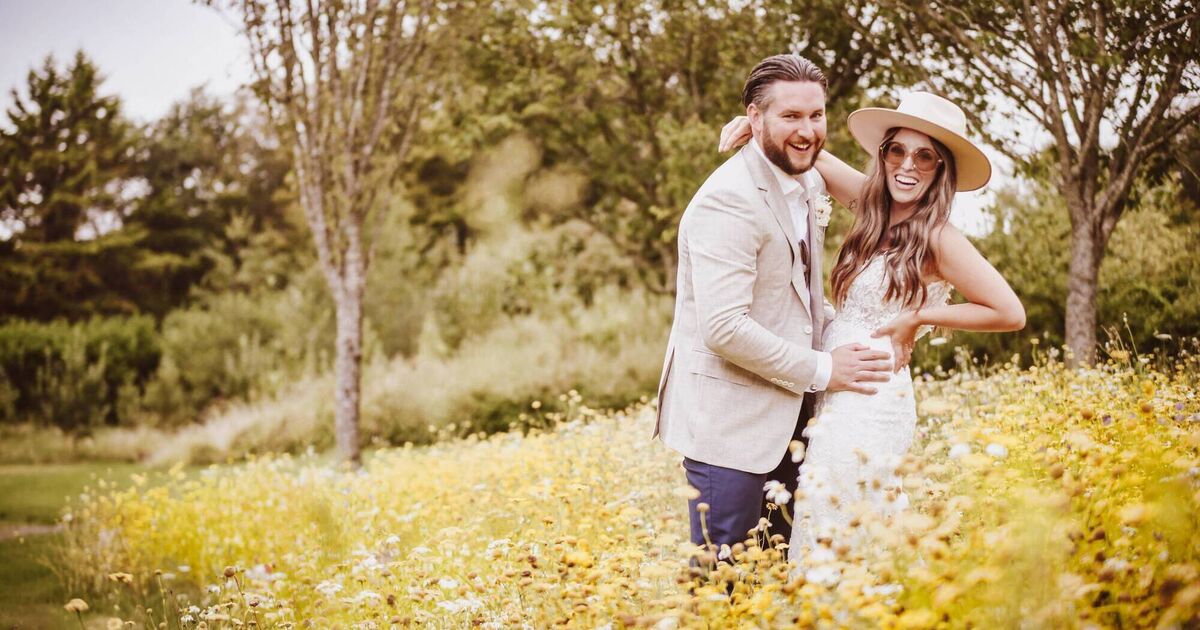 It was love at first sight for Melissa Dunne and James O’Leary when their eyes met in a bar in Dublin.

Melissa, from Dublin, and James, from Kilmichael, Co. Cork, tied the knot five and a half years later at the outdoor ceremony of their dreams in West Cork. “We first met in early 2016, at Sinnotts Bar, and it was love at first sight,” said James. “We went for a few drinks that night and we met up every night for the next week.”

James chose a winter wonderland setting for the proposal, three years later. “We got engaged in beautiful New York City in January 2019 at Rockefeller Center, under the Christmas tree. It was perfect, “he said.” The proposal came as a total surprise to Melissa.

They exchanged vows in a humanistic ceremony – with fasting of the hands – in the grounds of Fernhill House & Gardens in Clonakilty on August 22 of this year.

“Our initial vision was that our marriage would be a little different from others. We wanted to put our own stamp on things, ”said James.

“The ceremony took place outside and we organized the cocktail party under the marquee and the reception took place inside.

“We wanted to be in a relaxed environment and it certainly was. It was a fabulous place and our celebrant Linda Foley was amazing and made our outdoor ceremony special. We wanted it to be a bit rustic. Melissa is very unique and had a picture of what she wanted in her head.

John Sexton, their wedding photographer, captured the big day on camera, including morning photoshoots at James’ family home in Kilmichael, as well as at the Dunmore House Hotel in Clonakilty, where the bride was getting ready . “It was a pleasure to work with John,” said James.

The parents of the bride, Carol and Christy Dunne, and the mother and father of the groom, Kathleen and John O’Leary, toast their future happiness.

Alongside Melissa were her cousins, Megan Murphy, Nadine Quinn and Koife Quinn, as bridesmaids, while James had the support of her friend, Finbarr Dromey, as a witness, and her brother, Daniel. O’Leary, and his friend, Donal O ‘Riordan, as groomsmen.

“It was amazing. Everything turned out the way we wanted. We also had great weather,” said James.

“Ruth O’Brien’s ceremonial music added to the occasion. Her voice was absolutely beautiful. The songs we had were not your typical church wedding songs. Walking down the aisle to Frank Sinatra’s Love was special.

Melissa bought her Made With Love Bridal wedding dress, Cork, and paired it with a hat from Lackofcoloraus and Bottega Veneta shoes.

James and his group looked dapper in costumes from Louis Copeland & Sons.

The White Willow in Dublin arranged the bouquets; while The Flower Basket, Clonakilty, provided the flowers for the ceremony.

Their loved ones made the day memorable for the bride and groom.

Melissa’s grandmother, Ellen, gave Melissa her wedding ring, which Ellen had worn for over 60 years, and James’ father, John, gave his wedding ring to James.

“We were thrilled to have Ellen there that day,” James said.

“Being a Covid marriage, it was very hard not to know the numbers. We joked about maybe having to call people and remove them from their invitation. Fortunately, we didn’t need it! The guests made our day special – having all of our loved ones together to celebrate with us. “

The Dublin-based newlyweds will spend their honeymoon in Las Vegas and New York in January 2022.

Melissa is a senior hairdresser at The Craft in Dundrum and James is a buyer at Beacon Hospital in Dublin.