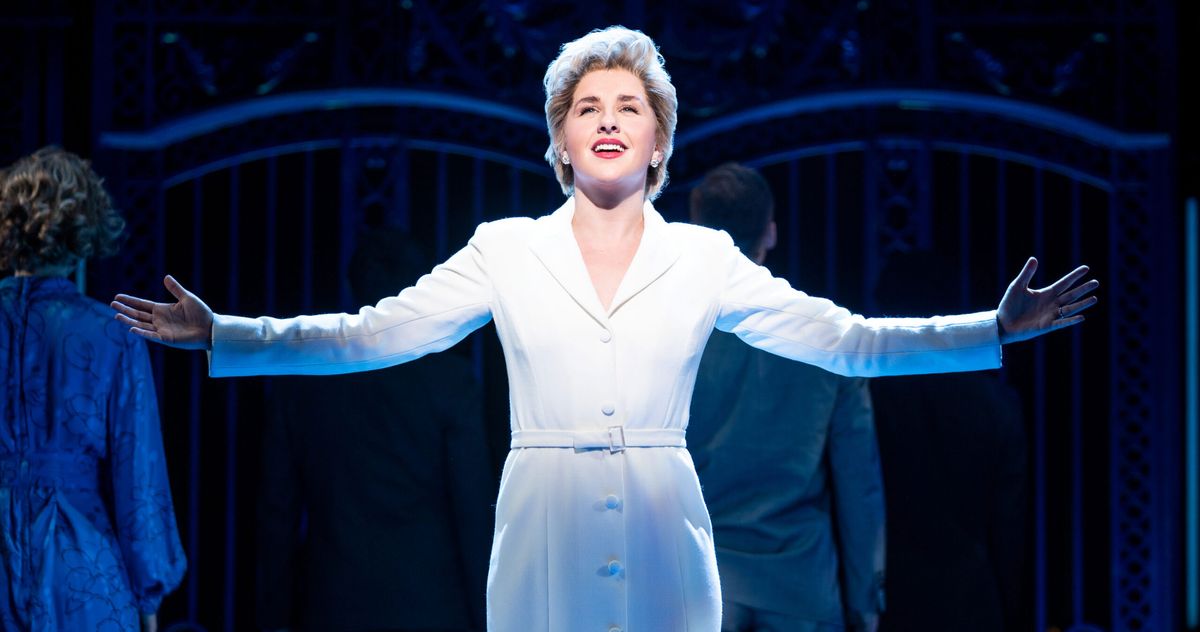 I’m old enough not to remember Diana Spencer’s death, I remember when she was married. I was little and my mom had sort of acquired a luxury wedding program style booklet that had extreme levels of detail on the huge dress, the bridesmaids’ headdresses, the veil. And sitting there under our dining room table in Kansas, looking at pages of pretty pictures of princesses, I came up with one of the most useful accomplishments of my young life: I understand, I was thinking, the rich have no taste.

A costumed parade disguised as a terrible Broadway musical is also ringing. It’s no surprise that pop-rock Diana: the musical is (deliberately?) bad – Netflix filmed it during the shutdown, so interested parties had plenty of opportunities to test it out on their laptops. Maybe you saw the gif of a topless James Hewitt (Gareth Keegan) rising through the floor on a saddle, or Diana (Jeanna de Waal) singing about how much she wishes Prince Charles (Roe Hartrampf) would listen to more hip music . “Maybe this girl can turn him into a rocker!” Diana cries, annoyed at a cello concert, as the ensemble aggressively dances shrugs all around her.

It is difficult to know if it was wise for the producers to release the film. On the plus side, it ensures that they have a prepared audience, ready for lyrics like “So how about that fucking dress / that fucking-fuckity-fuckity-fuckity fucking dress.” On the dark side, that means the wild reviews predate their opening night on Broadway. And, look, it’s good for the cheese; awkward false accents are no problem. There are a dozen quick changes for Diana that even add a bit of merriment. (William Ivey Long made the costumes, although he has since gone out of production.) The problem lies with the show’s faltering execution. For example, designer David Zinn built the show in a charming Buckingham Palace, repeating the gilded backrest of the Longacre Theater proscenium on the columns and doors that surround the stage. But as director Christopher Ashley sends the columns sliding here and there to create various interiors and exteriors, the structures often… falter. Perhaps a scene is already in motion – Diana is phoning a reporter or whatever – and a ten foot tall column will creep up behind her, giving a little hiccup as she falls into place. Has the palace wall been drinking? We are wondering. Of course, it is late to work.

Speaking of drinking during the day, the best Diane can hope is that her pantyhose will transform, through the magic of messy theatergoers, into a kind of warmly accepted kitsch. The show’s social media account encouraged people to drink wine previously, cheering “here for a good time not long!” There is plenty of evidence that the show’s creators, Joe DiPietro and David Bryan, are going for some sort of late-night extension.SNL-sketchy vibe, with Diana singing things like “Serves me well for marrying a Scorpio”, which point to (but never reach) camp. Camp should be possible. We have an appetite for the humiliations of the British Royal Family – at another Broadway theater, Six parades a somewhat older chain of such embarrassments, and people laze around it. Even in fact, there is a lot of nonsense to me: Diana does a dance at the Royal Opera House to impress her horrified husband; the couple’s infidelities with Hewitt and Camilla Parker Bowles (Erin Davie) performing in public; the outfits.

What keeps the show from getting into the happy camp, however, is its monotony and repetition. DiPietro and composer Bryan see their story as a drama of just four people: Diana, Charles, Camilla and the Queen (Judy Kaye). It is difficult to watch this square spinning for more than two hours. Sons are born but do not appear (except in the form of bundles, briefly); the queen has no husband, no other children, no advisers, no prime minister. The music, however, is what really hits you. Metrically, the songs seem to have only one idea. Almost every line is five or six syllables long; the melodies are interchangeable. This similarity turns out to be difficult to bear over time. The last song of the first act, intended to propel us into the intermission, has for refrain:

In a pretty pretty dress

In a pretty pretty dress.

This was repeated several times, until I was a total mess. Moreover, the only way to convey emotion in such a barren musical landscape is to go up a pitch, so that poor de Waal is stuck on an infinitely modulating escalator to nowhere. It chases away the beauty of his tone – the show is long, and there’s only one lingering and rather obnoxious vocal sound that can turn it up.

Alright, alright, so that’s bad. But unfortunately in the second act it gets a bit disgusting too. Anyone who knows the broad outlines of Diana Spencer’s life knows that eventually we will have to go to the AIDS clinic. Diana was a savvy curator of her own image: she understood the proto-influencer nature of the Royal Family early in the game. There have been several ways she has used this power for good, including a famous incident when she shook hands – without wearing gloves – with HIV-positive patients. Unfortunately, by the time de Waal steps into this hospital setting (a column guiltily extends to the left), the series has already slipped very far into parody. The same ensemble that played the paparazzi in fedoras and trench coats, popping their tails like extras of The dance of the vampires, simply cannot rotate to play AIDS patients with pale, shivering faces. It can be joyful to indulge in bad taste, don’t you know? At least until the moment it isn’t.

Diana: the musical is at the Longacre Theater.